Features.checkmk.com - Status update? Where do we stand?

Where do we stand here and when we can expect some actions byside adding new feature requests?

Right now it feels the same way as it did some years ago when you presented us on the
Conference, the new “Product Ideas” Category in this Forum with the note, that
we can post our ideas there and you will eventually pick those up, who received the most votes
(didnt work out, we know). More or less no communication and features actually implemented.

So, after nearly 2 month and 1800+ votes, we still dont see anything else as new
feature requests been added. Everything is under consideration - which is the same
status like before in the forum - nobody knows anything - just another dump of features.
No communication by Tribe29 Members and more or less only the community is talking - again

So when will there be some clear commitment (or not) on features taking place?
For example, its clear that “Support AND, OR and NOT for labels in filters”
will stay on top of the list. As it is also well known that some customers asked for it in the past
years many times and just a logical thing missing in CMK.
So no need to vote for it even more - so will you do it or not?

You also made it clear that you will decide if the feature will be implemented, based on your
roadmap and other “variables”. But if some of these will not be implemented for what ever reasons,
I would kindly ask to close them and not to waste more time of the users voting/thinking and maybe even commenting for them - we also dont like to waste our time

In addition, I kindly ask to consider talking about the features with the community and add
your knowlege to it as well, from developer and product owners perspective, as many of us know
from experiance, sometimes there is a lack of “vision” in some ideas (as its not really your daily business), so the implementation is missing thinks here and there which could be avoided due to some more communication with the community. We are all happy and motivated to make it a better monitoring tool as it is.

@TLI
For the sake of transparency I would appreciate if Tribe29 would add a short comment why they decided to prefer a feature with so few votes. 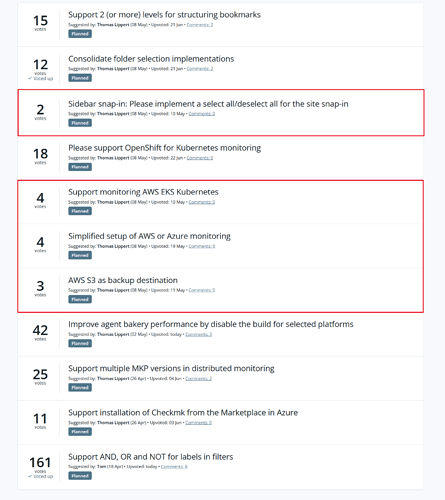 For the sake of transparency I would appreciate if Tribe29 would add a short comment why they decided to prefer a feature with so few votes.

May you list the werks pls. to be complete.

Some of these suggestions are from the conference and were quite high voted. They also fit the already existing road map and were planned anyway i guess.

Yeah, I think it is a good idea to add the werk to the feature requests. Once they are done

We are still migrating tickets, which was the initial main focus. It wills till take as at least one more month. I changed the state for some tickets as planned according the roadmap presentation on the conference.
Tickets get updated as we gain confidence, that a particular feature request will get implemented. The list will grow over time. If a feature gets not enough votes after a year, we will start closing them (but this is still 10+ months out

I changed the state for some tickets as planned

That means they are hopefully also closed for voting?

If a feature gets not enough votes after a year, we will start closing them (but this is still 10+ months out

Just to make it transpatent - In numbers?

If a feature gets not enough votes after a year, we will start closing them

You talked about “enough votes” - so of course asking about votes - What is enough?

From my experience, there will be a long tail of request, which did get a single vote from the creator. Those will be closed. After 2 years, requests with 2-3 votes will be closed, or votes from a single company.
It is all about keeping the portal healthy and useful