I am creating new SD card image for Raspberry Pi with Raspian(Debian) v11 Bullseye. Last standalone download of livestatus source was 1.5.0p24. I was able to compile this package on previous version (Buster) with
./configure --with-boost-libdir=/usr/lib/arm-linux-gnueabihf --with-nagios4
I am trying to compile livestatus from newer packages (check-mk-raw…), but I am lost, there is no separate configure in livestatus directory, and if I according to readme execute
make -C omd setup
I receive message
Please run the build in a docker container.
Dockerfiles for all Distros can be found under ‘buildscripts/infrastructure/build-nodes/’.
I found Dockerfile for debian-11, but I don´t know what to do. And
./configure --with-nagios4
fails with some strange error.
Any help welcome.
Vladimir

first of all it’s not recommended to run Checkmk on a SD Card because of the performance and the wear on the SD Card.

Do you wanna use Livestatus for Nagios or do you want to install the latest Checkmk version on your Raspberry Pi?

Thanks in Advance!
Norm

I have Checkmk Multisite on our central, running as x86 VM. On client sites, I have Raspberries 3Bs with Debian Stretch/Buster and Nagios 3/4 with Livestatus. I am booting from USB flash disks, not SD cards, and have performed some modifications in the OS like disabling swap and mounting /tmp as tmpfs, to minimize writes to the flash drives. Oldest ones run for several years, and failure rate of the USB disks is very low. Now we are slowly switching to Raspi4, Debian Bullseye, however on one side the same USB flash thumb drives have much higher failure rate (heat? Better preformance due to USB3? Don´ t know), but on the other side there is much better SD card performance, so we use SD cards with “endurance” attribute, and until now, not one failed. 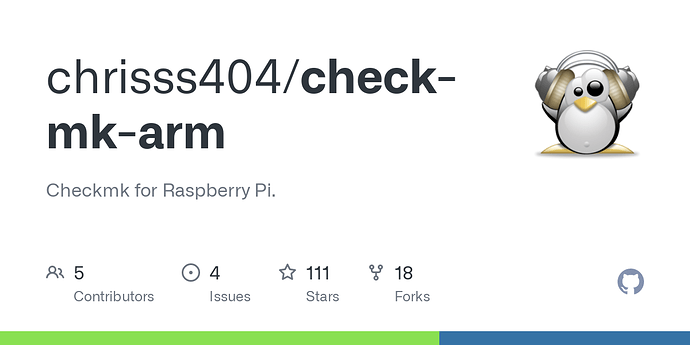 Checkmk for Raspberry Pi. Contribute to chrisss404/check-mk-arm development by creating an account on GitHub.

Inside the packages you should also find compiled livestatus modules but only for Nagios3 cores i think.