I need help with some behaviour I do not understand. I have a FreeIPA server that I am monitoring with Check_MK. Now I tried to verify, if the monitoring alerts when the service ipa.service fails. Long story short: It does not.

My suspicion is, that the “Systemd Service Summary” Check does not respect this unit. The raw client output shows 278 units, ipa.service is one of them and the state is failed. But the check_mk only shows a total of 100 units.

So my questions are:

What I already tried is to create a “Systemd single services” rule. The rule appears on the list of host rules, so it should apply, but nothing happens further…

Thanks in advance, Michael 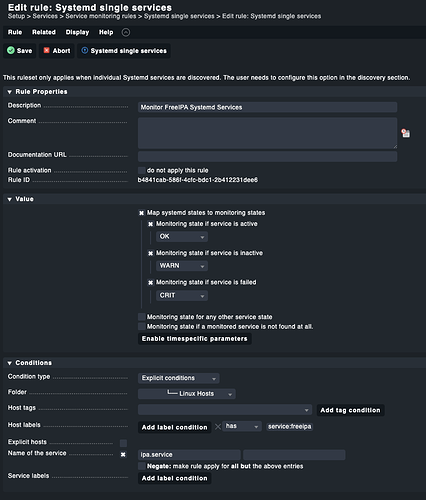 the rule you are showing is not what you expect. This rule is to map the systemd unit state to a specific state at checkmk. The filled fiel Name of the service is in this particular case misleading, because its referred to the service name in checkmk (like Memory, CPU utilization, Interface %s, and so on).

The systemd service summary should tell you, if there are any units in a not OK state, as far as i checked the source code. So i would expect your system service summary to be CRIT if the unit ipa.service is failed.

Can you share a screenshot of a service which has a failed ipa.service and also provide your exact checkmk version?

I see your point and understand why the mentioned rule is not working. Here are the requested informations:

Here is a screenshot of the service. What I see now, is that the time of the next scheduled service check is in the past…? 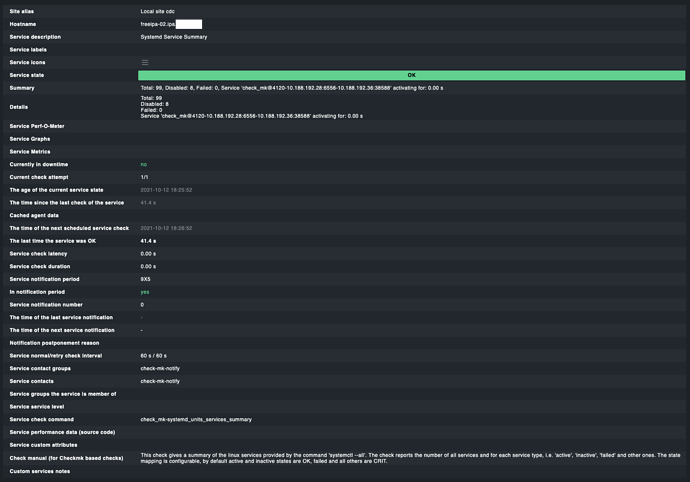 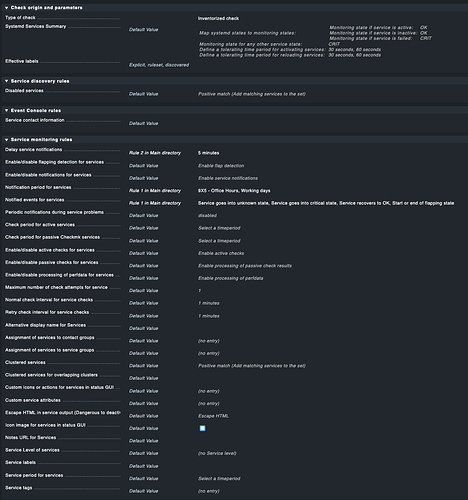 Can you check if your unit ipa.service looks like the following if you run systemctl --all on your server?

In this case your systemd service summary should turn red and report at least one failed unit.

Yes, this is my problem. It does not turn into red. I placed intentionally a config error to have this service in a failed state. The CheckMK Service state I posted before is exactly with this systemd service state on the server:

I have the same problem: two services are in state failed, but are not recognized as such.

Then I started the elasticsearch service manually

It looks like the lines with failed services are ignored/skipped completely. Maybe a parsing issue with the ● at the beginning of the line?