CMK version: 2.1.0 RAW
OS version: Centos 8
Hey All,
I’m not getting a lot of information regarding this issue so I’m trying my luck here.
So basically, i’ve installed the teams plugin from this link
Checkmk Exchange
I’ve created a webhook on my channel and also tested the webhook using curl.

On the checkmk side i’ve also configured it as such, insterted the webhook URL and for not testing it with sending notifications to all users. 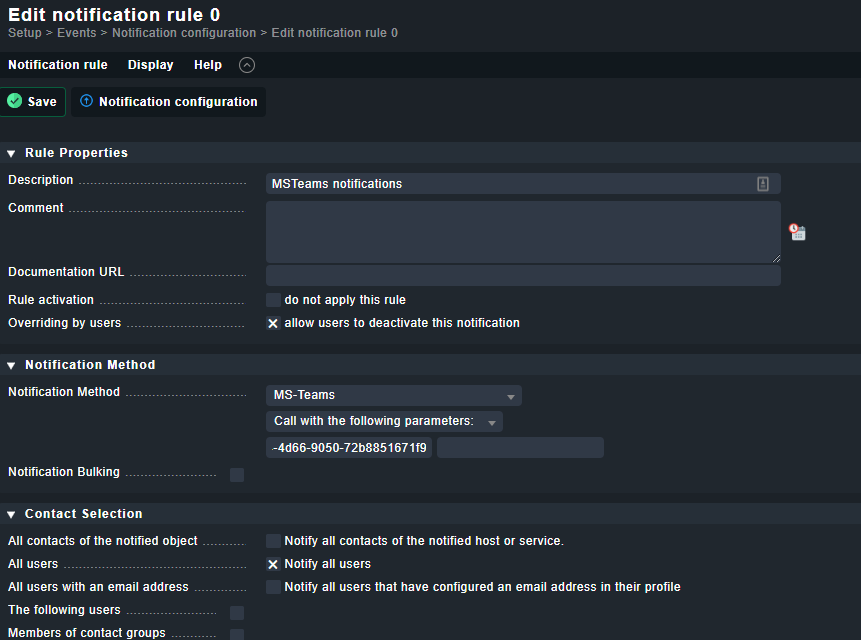 What am I missing? The parameter there isn’t the one for the webhook?
Thanks guys

Hi,
do you know, that Teams channels have email addresses? It’s not necessary to use this plugin. Just send HTML E-Mails to the channel address.

Hey @kdeutsch thanks for the reply
I do know that I have a way to send an email to a teams channel but I did not plan on using email for these notifications.
I’m still trying to get this working with the plugin for teams

Hi,
I installed the plugin on Checkmk 2.0 and get this webhook URL:

When installing on Checkmk 2.1 I get an error message:

At the moment this plugin is not compatible to Checkmk 2.1.

Oh that’s weird as it said on the plugin page that its compatible with version 2.x I assumed version 2.1 will also work.

Thanks for the help, as this is a new server I will just check the difference between the version and might downgrade.

UPDATE:
I searched a bit more and found another plugin for Teams.
Works great on ver 2.1 as the one in my first reply isn’t, at least for the time being.

Installation is easy and well described for the few steps that there are.

Thank you for sharing that link, it seems to be working properly. The previous plugin was definitely affected by the latest Checkmk update.

Btw, did you try to have more than one msteams plugins configured? Ultimately pointing to a different Team or Channel with different conditions, like specific hosts for specific internal company departments?

I have them both configured, but only receiving the calls on one of them.

Actually, I have managed to resolve this issue, so in case anyone’s interested, you just need to duplicate the plugin file (original file is teams, you can go for teamsv2) and also edit the header line “# Notify via Microsoft Teams” to something like “# Notify via Microsoft Teamsv2” so you can distinguish which is which from the Checkmk WATO notifications config. page.

The outcome will be two plugins, with different names, different labels but identical functionality. I just tested them and they can work in parallel. I think the issue was having the same plugin name, so Checkmk would confuse which one to call.